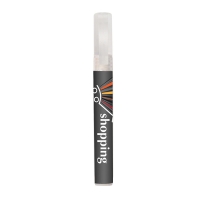 What it was purchased for: Everyone knows Applebee's Bar & Grill. Since their humble start decades ago in Atlanta, they have grown into a hugely successful restaurant franchise with over 1600 locations in 49 states; it's obviously hard not to notice them. Since their inception, Applebees have billed themselves as the "neighborhood bar and grill", but recently in certain areas, the restaurant has struggled to live up to their tagline. Other established franchises have taken business away from Applebees, claiming to be more community friendly. Applebees wanted to use a promotional product for these struggling locations to show their customers that they indeed care and are still proud to be a part of the community. Applebees contacted a promotional products distributor and the process to find the right promotional product began.

How it was distributed: In the past, the distributor had worked with supplier Admints & Zagabor and felt that they would once again do a fantastic job. Admints and the distributor picked the brains of Applebee's marketing group and decided to tie the promotion in with the company's latest national advertising campaign; the company is about to launch a promotion for their new buffalo wing recipe. The team of Admints and the distributor thought that the product should tie into this new advertisement, so in the end they decided on the Alcohol Free Hand Sanitizer Spray Pen. The spray pen is 10 ml., contains moisturizing aloe and it kills 99.9% of household germs. Not to mention it is an American-made product. We all know that wings are messy, so the use of the hand sanitizer spray after eating is logical. After settling on the item, Applebees then decided that they would use the spray in their most troubled locations; those locations whose productivity had dropped dramatically in recent times. The hostess would give the item to patrons as they left the restaurant; the gift being a clear indication that Applebees did indeed care about their customers and an incentive for those customers to come back to that neighborhood location.

Result or ROI: The promotion was an incredible success. The locations in question unequivocally had an upturn in business and in most instances, the promotion helped to reassert the restaurant as the go-to neighborhood hotspot. The spray pen advertisement was only supposed to run for six months, but due to its continued success it was extended for a full year, spreading to other distressed locations. The partnership between the parties was such a success that Applebees is currently working with the distributor and Admints again for a new project with their product AB25, the eco-friendly mint box.