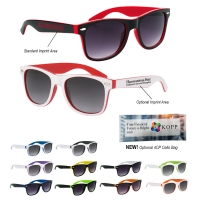 What it was purchased for: A major sports team was having difficulty keeping attendance up at weeknight games. They came up with the idea of doing special giveaways one night each week, and featured the 6224 sunglasses on one of these nights. The giveaway was promoted through the team’s website and the local sports station.

How it was distributed: The sunglasses were handed out to the first 5,000 fans through the gates.

Result or ROI: The giveaway was a huge success. Fans arrived hours early to get their sunglasses, which they loved because two-tone color matched their team colors perfectly. Since the event was held outdoors, everyone wore their glasses throughout the game. Attendance increased throughout the giveaway period and the team has continued the program.